The day after any significant event always feels like something is missing. It's sort of like that feeling when you've been driving at 90 m.p.h. on an open road with no traffic and now, you're stuck behind an 18-wheeler in a one-lane construction zone. You want to go, but there isn't anywhere to go.

Maybe that's why the stakes racing scheduling wizards only put two stakes races with $100,000 or more on the calendar for the day after the 2019 Preakness.

In her championship honor, five fillies and mares will race 6 furlongs on Santa Anita's main track. A big edge is in play for fast horses at the distance/surface. Early speed has won 83 of 102 (81%) races during the current meet with 46 (45%) winning wire-to-wire.

In a game of risk, anything that wins at 45% carries 6/5 odds to breakeven. The two morning-line favorites, SELCOURT (PP: 1 ML 7/5) and DANUSKA'S MY GIRL are the fastest out of the box in this field. YUVESTI could challenge the pre-race chalk, but faded when the pace was on par with SELCOURT's and DANUSKA'S MY GIRL's typical opening quarter fractions. It's not a bad bet to take either if their odds are 6/5 or better.

The way our handicapper sees it, the two fast ladies will most likely hit the board with another sneaking into the middle of them.

From our Pro-Subscriber's Bonus Commentary: 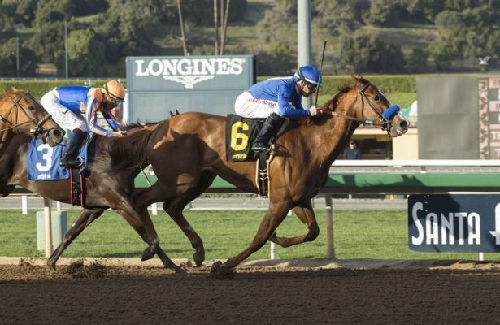 "SELCOURT is making her first start in about six weeks. She's finished first or second in her previous off a layoff races at Santa Anita. SHOW IT N MOE IT has hit the board in 10 of 12 SA starts (12: 5-2-3). DANUSKA'S MY GIRL posted the highest last race speed figure for this group and her personal best. YUVESTI looks tons better than SMILING TIGRESS."

Another short field of five will chase one another around Woodbine's all-weather track for the $125,000 QUEENSTON STAKES. This race is significant as these horses are eligible to participate in the QUEEN'S PLATE. It's the Canadian equivalent of the Kentucky Derby as the first race in the Canadian Triple crown. It's also the longest continuously run thoroughbred race in North America, dating back to 1860. Wow!

Like the DESERT STORMER STAKES, the QUEENSTON STAKES favors horses with a quick first step. Fifteen of the first 22 (68%) races were won by horses tagged as early speed types. On average, the 22 winners ran 1.4th at the quarter call and 1.2nd at the half.

All the horses in the field except DUN DRUM (PP: 5 ML 8-1) have shown some ability to get out of the box in a hurry, but none have 1s littering their past performance lines.

Our handicapper likes one that just switched up his running style from a closer to being on the lead in his first race back since March. Many times, the first race with a change in style doesn't end in the winners' circle. It's the second or third race where the new style pays off.


From our bonus commentary:

"FEDERAL LAW was bumped at the start and yielded late in his last race and first since March. Although the finish doesn't look good on paper, he significantly improved his fractions for the first four furlongs. He should be better today. MY SILENCER came off the bench to win a laugher as the $0.20 favorite. Trainer Mark Casse goes win-win at 19%. SOUPER SUCCESS also won his first race since his last race in November. Trainer Michael De Paulo does it back-to-back at 18%. CORDUROY ROAD's trainer Robert Tiller spots his horses well, winning non graded stakes at 27%."