Saturday Stakes: Preakness Champ War of Will takes on the turf in the Sunshine Forever Stakes

Stakes races this weekend are like free pizza at an office party, slim pickings. The $75,000 Sunshine Forever Stakes at Gulfstream Park is the only stakes race on the calendar. Man, states can't reopen fast enough.

Despite the lack of quantity and minimized price-tag, the Sunshine Stakes does field some quality horses. Triple Crown contestant and 2019 Preakness Stakes winner, WAR OF WILL (PP:12 ML 10-1) is biggest name in the field. But, as his double-digit morning line odds show, the four-year old is not amongst the pre-race favorites to win.


The Mark Casse Trainee is stepping down in class from the Grade I, Breeders' Cup Classic where he finished ninth, a full 19 lengths behind VINO ROSSO. He hasn't raced since November's Breeders' Cup and this will be WAR OF WILL's first race on turf since finishing fifth in 2018's Breeders' Cup Juvenile Turf.

The light-brown Preakness winner started his career with four grass goes before flipping to dirt. He raced near the front in the quartet of turf tries but faded late in each of them. We expect he'll take the same frontrunner approach today and shouldn't have too much company on the lead.

HALLADAY (PP: 6 ML 4-1) is the other consistent speed horse in the field and is making his second start following a brief racing respite. He won coming off the bench with his highest speed figure, by a wide margin.

There is always the fear that a performance well above the previous best will be followed by regressing the norm. However, HALLADAY's second effort after a layoff has hugged the first in his limited history. If he runs a similar race today, he'll add to his two wins in two tries at Gulfstream Park.

Overall, trainer Todd Pletcher's horse has hit the board in eight of nine on grass and should be considered for the top of the ticket. He is our pick to win.

The rest of the field will likely need to chase down WAR OR WILL and HALLADAY if they want the Sunshine Forever trophy. ADMISSION OFFICE (PP: 11 ML 5/2) is the morning line favorite to get the job done. The five-year old offers horseplayers one of our favorite handicapping angles, dropping in class after posting the highest, last race speed figure.

He's got three runs on Gulfstream grass with a pair of seconds, missing the Ws by a combined length and a half. Jockey Joel Rosario moves back into the irons and has a win, second and third in his previous three mounts on ADMISSION OFFICE. Two of them were at today's distance where the five-year old has finished in-the-money in each of his three outings (3: 1-1-1).

The last time we saw SOCIAL PARANOIA (PP: 9 3-1) he went form way, way back at the start of the Grade 111, Appleton Stakes to score the win as our top pick. Pletcher's second horse in this group has a strong history on turf, at the distance and at Gulfstream Park. 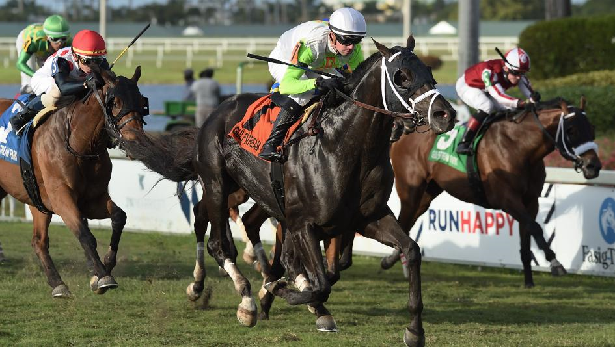 The four-year-old son of STREET BOSS has finished in-the-money in eight of nine on grass, four of four at the distance and won two of two at Gulfstream. This will be SOCIAL PARANOIA's second start after a layoff, a 20% angle for Pletcher. Our only concern is that SOCIAL PARANOIA dropped off a touch in his only other second start after a rest. His numbers just won't be strong enough to go back to back Ws if he slips at all.

Here's how we line them up:

If you are looking for some longshots to add to your tickets, consider AQUAPHOBIA (PP: 4 ML 10) and HIGHLAND SKY (PP: 10 ML 15-1) as we have them listed as our two alternate picks.