There are sure to be plenty of fireworks at the track this July 4th weekend. Today, there are 16 stakes races with at least $100,000 in prize money, including a $1 million race at Belmont Park. In fact, Belmont is the heartbeat of big races this Saturday with a total of $3 million up for grabs with:

Of course, the BIG MONEY attracts some big names as well. Horseplayers and fans will see the likes of Kentucky Derby runner up CODE OF HONOR, NEWSPAPEROFRECORD and CATHOLIC BOY chasing that money. It should be action packed in Elmont, New York.

The BELMONT OAKS is headlined by pre-race favorite NEWSPAPEROFRECORD (PP: 2 ML 5/2). The three-year-old filly is coming off a pair of second-place finishes to start 2019 after going undefeated in three 2018 starts. She left the gate as the heavy post-time favorite in both starts this year, disappointing as the public's choice. 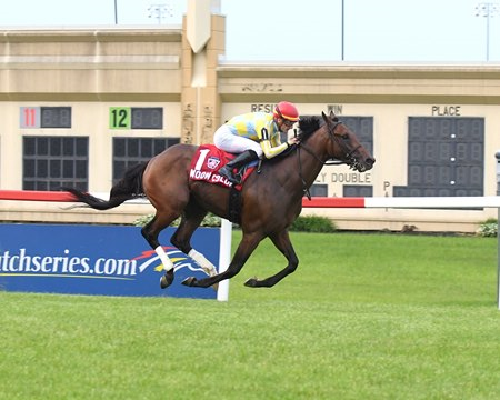 NEWSPAPEROFRECORD will get a chance to set the record straight as her two conquerors are in the field as well. CAMBIER PARC (PP: 9 ML 4-1) got the better of NEWSPAPEROFRECORD by 1 1/4 lengths, passing NEWSPAPEROFRECORD in the stretch on her way to the winners' circle in the Grade III Wonder Again Stakes on June 6, 2019.

CONCRETE ROSE is one-and-one versus the morning-line favorite, finishing eighth, behind by 11 lengths the first time they squared up on November 2, 2018 at Churchill Downs in the Grade I Breeders' Cup Juvenile Fillies Turf.

Today is the rubber match. Who is going to own the tiebreaker? Here is how our handicapper lays it out in our Pro Subscriber's Bonus Commentary:

Like the BELMONT OAKS, the BELMONT DERBY will be run at 1 1/4 miles on Belmont's Inner Turf course. A crowded field of 14, three-year-old boys will take to the starting gate to battle it out for their share of one million dollars.

The BELMONT DERBY is a great betting race. Oddsmakers have no idea who is going to win as evidenced by the pre-race lines. DIGITAL AGE (PP: 13) is the morning line favorite as the "we had to make somebody the favorite" odds of 9/2. Next up is SEISMIC WAVE (PP: 3) at 5-1. In total, there are only five horses with morning-line odds under 10-1. Get this one right with the exotic bets and it's likely to be a handsome payout.

We'll try to find some clues from the previous nine races at the distance/surface to see which horse(s) have the profile of a Belmont 1 1/4 mile inner turf winner.

The rail horse has the biggest advantage so far, winning three of the nine races (33%). Something that wins at 33% equals race odds of 2-1. That alone makes MOON COLONY (PP:1) a smart bet at morning-line odds of 12-1. He seems to be a good pace fit as well. The typical 1 1/4 mile inner turf winner runs 4.1st in the opening quarter and 1.9th at the half-mile marker.

In three of his last five races, he ran fourth twice and third once in the first 2 furlongs, although he ran sixth and eight in his two most recent starts. With the rail and turns early and often for the 1 1/4 run on Belmont's inner turf, MOON COLONY is more likely to be closer to third or fourth than sixth or back at the first call.

It doesn't look like those angles made it past our handicapper as MOON COLONY tops our picks in our Pro Subscriber's Bonus Commentary.

"MOON COLONY should get a good trip on the rail, which has won three of nine at the distance/surface. DIGITAL AGE has three races and three wins, all on the grass. DEMARCHELIER is also three for three, including a W on Belmont's inner turf in his last start. PLUS QUE PARFAIT runs hot and cold, looking for a hot one today."