Along with cashing in on their share of the Breeders' Cup Juvenile Fillies $2 million jackpot, horses that finish in the top four will earn qualifying points for the 2020 Kentucky Oaks. The winner will vault to the top of the leaderboard with 20 points, while second will score eight, third gets four points and fourth receives two points. 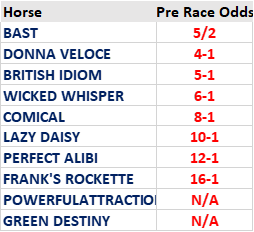 Just like their male counterparts, the two-year-old fillies will run 1 1/16 miles on Santa Anita's dirt track. The Arcadia, California track has hosted the Breeders' Cup nine times since 1984. Seven of the nine were run on a dirt surface. The other two outings on a synthetic surface in 2008 and 2009. We'll focus on the seven dirt runs with an emphasis on 2012, 2013, 2014 and 2016's Breeders' Cup races.

Since moving off the all-weather track, three of the four Breeders' Cup Juvenile Fillies winners ran a speed number below 100. BEHOLDER was the only young lady to top triple-digits in 2012. The average speed figure hit 96 on the radar, take out BEHOLDER and it drops to 93.

Outside Post wins the most: The six-hole came home first in the last two Breeders' Cup Juvenile Fillies in 2016 and 2014. RIA ANTONIA found the winners' circle in 2013, leaving the gates from gate number 10 and BEHOLDER road the rail all the way to the wire.

For the Girls, haste makes waste: Unlike the mostly off the pace boys in the Breeders' Cup Juvenile, the fillies get to work right away. Three of the last four Santa Anita, Breeders' Cup Juvenile Fillies' winners posted nothing but 1s across their performance line. CHAMPAGNE ROOM ran second until the stretch in 2016 before taking over for good in the lone non wire-to-wire effort.

The Profile of a Santa Anita, dirt Breeders' Cup Juvenile Fillies winner: Horseplayers should look past the likely post time favorite and focus on the filly(s) most likely to hit the ¼ pole first or second, especially those with outside post positions.