At 5:51 pm Eastern time, the starter's bell will buzz, the green gates under the red Saratoga banner will open, and nine fillies will rush out of their chute for the $100,000 CORONATION CUP STAKES at Saratoga race course. The field of three-year-olds will make a mad 5 ½ furlong dash on the Spa's turf course for the CORONATION trophy.

Horseplayers might expect the short sprint to be dominated by frontrunners, but that hasn't been the case at Saratoga. Only 53% of the 49 winners at the distance/surface in last summer's meet were cast as early speed. Only one sprinter claimed the crown in the first three 5 ½ furlong turf starts of 2019.

On average, the typical winner runs around third in the opening quarter, second or third at the ½ mile marker, and then turns on the afterburners out of the turn and down the stretch. The two pre-race favorites will need to be trend busters to have their names written on the oversized, $55,000 winner's check.

Oddsmakers put BREAK EVEN (PP: 4) as the slight morning-line favorite at 2-1 against his starter's gate neighbor, A BIT OF BOTH (PP: 5), with odds of 5/2. Both ladies like to get out of the gate and go, fast. Neither has seen the backside of another horse in their last seven combined races.

Break Even at Churchill Downs

BREAK EVEN has won four out of five races wire to wire, including the last three. She was second by a ½ length through the first half-mile in her lone non-gate-to-wire victory. Her handful of starts have all come on dirt, so she could race a bit differently in her first attempt on grass. Her trainer Brad Cox is adept at the surface switch, scoring at 30% when putting horses on grass for the first time. Foreshadowing possible turf success is BREAK EVEN's undefeated record on an off-dirt track: three races and three wins.

Unlike the morning-line favorite, A BIT OF BOTH has a turf race on her resume. She blasted her way to a 5 1/2 furlong win on the grass in her last race, which was her first start since heading to the sidelines on April 20th. 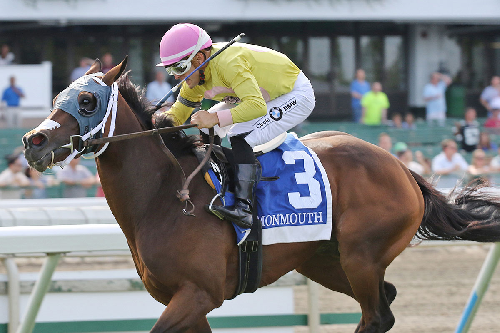 A Bit of Both at Monmouth Park

A BIT OF BOTH will challenge the undefeated BREAK EVEN every step of the way. The Jason Service trainee has won five out of six races, with a second place finish the only time she didn't find the winners' circle. The duo could run 1-2 all the way around the track, although they will have plenty of company as I'LLHANDLETHECASH (PP: 1 ML 15-1), LYRICAL LADY (PP: 2 ML 8-1), MIDNIGHT FANTASY (PP: 7 ML 15-1), MY GALINA (PP: 8 ML 6-1), and ABYSSINIAN (PP: 9 ML 8-1) like to chase the rabbit from the front as well.

If any are going to make it to the wire before BREAK EVEN or a BIT OF BOTH, our handicapper believes it will be either LYRICAL LADY or MY GALINA. LYRICAL LADY returns to Saratoga where she started her short career with a smashing, 5 ¾ length win over a field of 10. She raced in the Grade II Adirondack in her second start only to get pummeled by 16 as the favorite. She repeated the win and went up in class to get crushed in a G2 cycle in her last two outings. On paper, it looks like LYRICAL LADY is freshest and most fit in her first start following some rest, which is the case today as May 3rd was the last time she put hoof to track.

MY GALINA will complete the major New York racing circuit with her Saratoga start today. She debuted with a wire-to-wire squeaker on Aqueduct's inner turf. She made her way to Belmont's main turf course for a third-place finish after giving up the lead in the stretch in a Grade III. The Wesley Ward horse will be cutting back from 7 to 5 1/2 furlongs, which could help. However, MY GALINA hasn't raced since May 18th and her workouts have been average to blah since her last run.

This is how our Pro Subscriber's Bonus Commentary lines them up at the finish line.

"BREAK EVEN has five races and five wins. A BIT OF BOTH is another winner with six races, five wins, and a second, which includes a W at the distance/surface. LYRICAL LADY is dropping in class after getting smoked in a G2. She should rebound today. MY GALINA has a win and a third in her two career starts, both on turf."

The CORONATION CUP STAKES should be a fun one to watch, sort of like a 100-yard dash at the Olympics.