Shhh! Do you feel that? Can you feel it? Yeah baby, the excitement of horse racing is back, big time. Several tracks have reopened, giving horseplayers a next to normal feel. Online, at least, anyway. Charles Town, Churchill Downs, Golden Gate and Santa Anita are saddling 'em up and letting them run, again! No doubt, others will be added to the calendar shortly.

The sport of Kings is about to rule the summer of 2020.

Today, let see who we think will wear the crown in the $100,000 Musical Romance Stakes at Gulfstream Park. A group of nine with let loose in the 10th race, running 7 furlongs on Gulfstream's main track. The distance and surface gives the 60/40 edge to horses that get out of the gates early. The typical winner is placed third at the quarter-mile marker and second/third after the opening half-mile. Meanwhile, frontrunners take the express lane to the winners' circle at nearly 25%.

If you are putting some dough in play, speed types better be high on your list for the Musical Romance Stakes. It's no surprise then to see our top three picks as contenders that should be out in front.

LADY'S ISLAND (PP: 7 ML 7/5) has won eight of her last 10 starts and didn't see the backside of another horse in any of the W. Oh, by the way, she finished second in the other two starts. The six-year-old is making her second start following a layoff. She pulled off the win in her return to work at Tampa. Trainer Georgina Baxter wins second starts at 22% and follows a W with another at 26%.

The dark brown mare should feel right at home at GP where she has six wins, two seconds and a third in nine efforts. Yep, she hasn't missed the board.

As impressive as her resume is, she's not our top pick.

Nope, that honor goes to BELLERA (PP: 2 ML 4-1). She hasn't raced since January at Aqueduct, but she's put in some decent workouts since. Todd Pletcher's trainee has won her last two efforts following a layoff, by ¾ lengths at this level in her last and by five at Saratoga in August 2019.

Overall, she's won four of her seven career start with a pair of seconds. She was squeezed at the start of the Grade III, Turn Back the Alarm Handicap and tossed jockey Jose Lezcano. Other than a second in her debut, she's a neck away from winning her last five with a jockey onboard.

Rounding out our power trio is WILDWOOD'S BEAUTY (PP: 3 ML 7/2). The four-year-old daughter of KANTHAROS is not going to be on the lead. Tier-one jockey Irad Ortiz, Jr. is likely to position his horse mid-pack, somewhere between third and sixth in the first quarter-mile. That's her usual home. 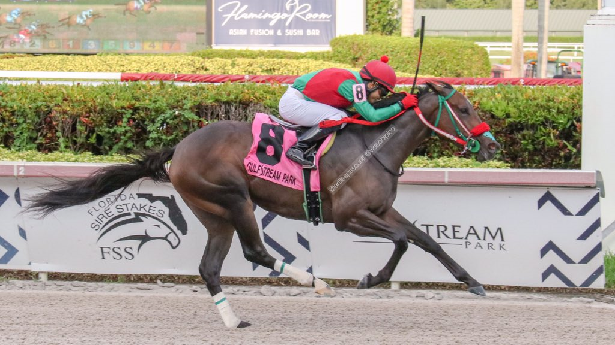 From there, she normally comes home first or second as she has five wins and seven places in 13 races. Her lone miss was her only attempt to give it a grass go. Guess, she won't try that again but she's certainly happy to try 7 furlongs a lucky seventh time. WILDWOOD'S BEAUTY has three wins and three seconds in her first six tries at the distance. And she's no south Florida slouch with a win and six seconds in seven Gulfstream outings.

Yes indeed, it feels good to look at the schedule and see it growing, gives us a small taste of normalcy. Hopefully, we'll be back in the stands too, can't wait!