We continue our series on Building the Profile of a Breeders' Cup Winner with the main event of the evening, The 2019 Breeders' Cup Classic. The contenders will run 1 1/4 miles on Santa Anita's main track for their share of $6 Million jackpot.

The Breeders' Cup Classic gets the main billing as it always fields some to the world's best thoroughbreds. This year is no different with headline-grabbers like MCKINZIE, CODE OF HONOR and WAR OF WILL.

MyBookie.AG sees MCKINZIE and CODE OF HONOR as the two with the best, pre-race odds to take home the Breeders' Cup Classic crown. 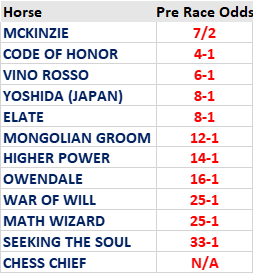 Based on the recent history of Santa Anita run Breeders' Cup Classic results, MCKINZIE's and CODE OF HONOR's teams are probably engaged in a back and forth game of, "No, you be the post-time favorite." "No, it's OK, you can be the favorite;" wash, rinse repeat.

The Curse of the Santa Anita Chalk: CALIFORNIA CHROME is the only post-time favorite to hit the board in the last four Breeders' Cup Classics at the "World's Most Beautiful Track." (On a side note, it really is a beautiful track. Horseplayers should put a visit to Southern California on their bucket list. Anyway, back to racing.)

CALIFORNIA CHROME hit the wire second, a ½ length behind Bob Baffert's ARROGATE in the 2016 Breeders Cup Classic. Three other chalks missed the board entirely, coming home 4th, 9th and 7th in 2014, 2013 and 2012, respectively.

On average, Santa Anita Breeders' Cup Classic kings went off between 5-1 and 6-1, VINO ROSSO? Perhaps, he got one of the worst disqualifications we've seen in a while in his last start, DQd into place money.

Posts, the inside three aren't for me (or winners): Breeders' Cup Classic winners' circle photo don't include anything below four. The last four Santa Anita champs broke from gates 9, 7, 6 and four, from the most recent back. Owners and trainer will be holding their breath when posts are drawn.

Triple-Digits plus 13 or Bust: The 2019 Breeders' Cup winner will run a speed in excess of 100. Santa Anita's most recent quartet of champs hit 124, 113 (all-time lowest Breeders' Cup Classic), 119 and 122 on the speed radar gun. As a matter of fact, no Breeders' Cup champion has run a number bellow 113, as we noted. Since speed numbers were recorded, just nine of the 27 Classic winners posted speed ratings below 120.

Coffee may be for closers, but not for Classic Champs: Two, Santa Anita Breeders' Cup Classic belt owners went wire-to-wire in 2012 and 2014, while the 2016 and 2013 winner's checks went to stalkers. In 2016, ARROGATE ran fifth in a field of nine at the 1/4 pole. MUCHO MACHO MAN was 4th of 11 at the first call in 2013. Be it a closer or stalker, the winning should come home in roughly two-minutes and small change.

The Profile of a Santa Anita, Breeders' Cup Classic Winner: The 2019 Breeders' Cup Champ will need the muscle to run a speed rating above 110, probably in the 120s. He won't wear the red one, black two or blue three. The crown won't be won early but can be lost to horses running worse than fifth in the opening quarter. Finally, the favorite, as good as he'll look on paper, will have to break the curse of the chalk to find the winners' circle and should consider himself lucky if he finishes in-the-money.

In case you missed them, check out: