Known as the Breeders' Cup Ladies' Classic from 2008 and 2012, the Breeders' Cup Distaff brings some of the world's best female dirt-horses to Santa Anita for a 1 1/8-mile, championship run of 1 1/8 miles on the main track.

A dozen fillies and mares are scheduled to exit the gates at 7 pm Eastern on November 2, 2019. The field is headlined by MIDNIGHT BISOU. Trainer Steven Asmussen's horse is undefeated in 2019, going seven for seven while banking $1.845 million.

MyBookie.AG has MIDNIGHT BISOU as the 6/5 pre-race favorite. Here are the full field odds. 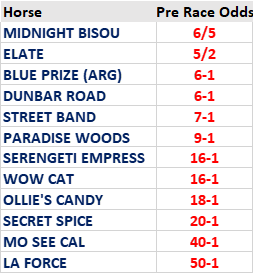 As we have in our series of Building the Profile of a Breeders' Cup Winner articles, our focus is on Santa Anita, Breeders' Cup winners in 2016, 2014, 2013 and 2012. This year will be the 10th time the southern California track hosted Breeders' Cup weekend. We only look at the last four because Santa Anita switched from an all-weather track after 2009.

Let's see what it takes to wear the Breeders' Cup, Longines Distaff crown.

The Favs are the Plays: Two of the four Distaff champions at Santa Anita were the post time favorites. One finished fourth and the other came home second at the wire. MIDNIGHT BISOU is likely to maintain favorite status all the way to race time. She should be safe to play as a potential winner and even stronger candidate to finish in-the-money based on recent results.

Outside, Even Posts win the Most: Two-time Breeders' Cup Distaff winner, Beholder, won wearing the black two in 2013. Otherwise, Santa Anita's three other Distaff Queens left from gates six, eight, and 10. Coincidence or not, all the superstitious trainers will have their fingers and toes crossed when posts are drawn on Monday, October 28th, hoping for an even numbered post. Probably number four as it would complete the 2, 6, 8, 10 SAT like pattern.

The Profile of a Santa Anita, Breeders' Cup Distaff Winner: Odds are the post-time favorite will be a major player. If the chalk isn't the champ, the winner will most likely be at odds of 7/2 or less. She might have an even numbered post, probably six or higher. The Distaff crown will likely be worn by a filly or mare running third to sixth for the first 6 Furlongs, and then hit the wire with a speed figure of at least 114.

Check out the other Profile of a Breeders' Cup Winner articles here: