Sunday Stakes: We've got some explaining to do for the DESI ARNAZ Stakes

The DESI ARNAZ stakes in named in honor of entertainer, Desi Arnaz. Born in Cuba as Desiderio Alberto Arnaz y de Acha III, Arnaz made his name as Ricky Ricardo in the iconic TV sitcom, I Love Lucy. 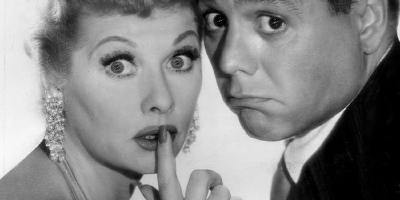 Desi Arnaz and Lucille Ball – his TV and real-life wife

It's somewhat fitting that the race in his honor comes the day before Veterans' Day. Although he wasn't deployed due to an injury, he was drafted for World War II. After basic training, Ricky Ricardo was designated to direct USO operations at Birmingham General Army Hospital in California. There, he arranged starlets to meet wounded soldiers with a cold glass of milk, typically their first request.

This year, a half dozen, two-year-old fillies will race for the 2019 Desi Arnaz title. The field of six will run 6 1/2 furlongs around Del Mar's main track for their share of the $100,000 prize money.

LEUCOTHEA (PP: 4) is the heavy, pre-race favorite with 4/5 morning-line odds. When she's right, she's dominant, blowing away the field in pair of wins by 8 1/2 and 14 lengths, from the most recent back. However, she's more likely to blow a tire than be first at the wire. She bobbled and lost the jockey, finished eighth, 29 lengths back, and seventh in a field of nine in her three other outings.

If she's first coming out of the turn, she probably wins. If not, she could be the caboose.

LEUCOTHEA could win and should be considered at the top of the ticket but is a vulnerable favorite and we would avoid singling.

STELLAR SOUND (PP: 6) is next on the board at 5/2. She's also proven to be a boom or bust filly in her two-race career. She won her debut with a solid score at Del Mar and then followed it up with a fifth-place stinker 13-days later in the G1 Del Mar Derby. Although the finish was disappointing, she did cut her 4-furlong time by 1.6 seconds compared to her first start despite adding a furlong.

Experience says faster fractions are usually followed by a better race the next time around the track. Plus, Drayden Van Dyke returns to the irons after riding STELLAR STAR to her maiden win.

STELLAR SOUND is a serious contender for the win and the top of exotic tickets.

SPITEFULNESS (PP: 2) is the oddsmaker's third choice at 5-1. She has a win, place and show in five career starts. However, all the in-the-money runs were on a synthetic track. The Philip D'Amato trainee has missed horribly in her two dirt runs, finishing seventh both times by 21 and 16 lengths behind the winner.

If this race was on a synthetic surface, then SPITEFULNESS would garner consideration.

We'll toss SPITEFULNESS from our tickets until she shows good form on dirt.

BIDDY DUKE (ML 6-1) rides the 14% winning rail and returns to dirt racing after trying turf for the first time. Trainer Andrew Lerner doesn't do the turf to dirt surface switch too often but scores at 36% when his horses make the change.

She's hit the board, cashing a top-three check-in six of her seven fast dirt outings with a pair of wins, three seconds and a third. She's in the money, two for two at Del Mar with a win and place. So far, she hasn't run past 5 1/2 furlongs and tends to flatten out and give back some ground late.

The extra furlong could hurt BIDDY DUKE, but her running style and record suggest she could factor.

Add BIDDY DUKE to the backside of exotic tickets.

ROADRUNNER'S HONOR (PP: 3 ML 12-1) won her debut at Santa Anita on October 12, 2019 and makes her second career start today. She's the second most expensive horse in the field behind STELLAR SOUND. She defeated a deep field of 10 horse wearing down the leader with a power move in the stretch.

Jockey Rafael Bejarano rode ROADRUNNER'S HONOR to her maiden score and is in the irons again. Bejarano and trainer Doug O'Neill work well together, winning nine of their last 21 races as a team.

Expect ROADRUNNER'S HONOR to improve in her second start. She's an outside threat to win and should be considered in exactas, trifectas and superfectas.

ORQUIDIAS BIZ (PP: 5 ML 12-1) is another making the turf to dirt move. She won her last, breaking her maiden in her third try and first face following a two-month layoff. Trainer Jeff Mullins wins at 20% with grass to dirt angle and at 15% following the maiden breakthrough.

It's concerning that she backed up in both of her dirt races and that jockey Drayden Van Dyke gets off ORQUIDIAS BIZ to ride STELLAR SOUND. Jocks usually go with the horse they feel gives them the best chance to bank some prize money.

Although ORQUIDIAS BIZ improved in her return to the track, she's a long shot to find the winners' circle but does offer value in the backside of exotic tickets.