While Bob Baffert always has a stable full of great Derby potentials, another stand out colt took the spotlight this weekend at Los Alamitos and it's quite probable that IMPROBABLE will be in the field at Churchill in May.

The Los Alamitos Cash Call Futurity (G1) is one of those early stakes races that gives us an insight on horses to watch as Derby potentials. This weekend IMPROBABLE took the stage and didn't disappoint. At the break and down most of the backstretch, he stalked the pace setters and didn't seem to settle into the pace very well. However, once he came around the turn and headed for home, he stretched out and took the win handily. The win gives IMPROBABLE his first 10 points on the Derby board, while his stablemate GAME WINNER has 30. MUCHO GUSTO followed behind for second and EXTRA HOPE finished third. 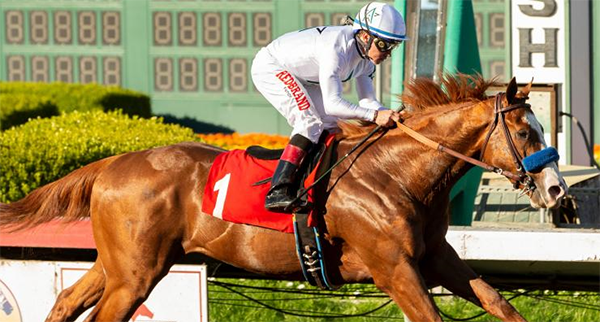 The Starlet Stakes (G1) was a highlight for the fillies at Los Alamitos this weekend as well. The field featured AMERICAN PHAROAH'S half-sister CHASING YESTERDAY with an exciting photo finish at the wire. While CHASING YESTERDAY had a couple of very wide turns that caused her to lose ground, she showed she had tenacity as she edged ahead of the 30-1 longshot ENAYA ALRABB by a nose, who also edged by the Baffert trained MOTHER MOTHER by a neck. While she still has a lot to prove, CHASING YESTERDAY did rack up 10 points towards the Kentucky Oaks.

Drayden Van Dyke had the ride on both of grade 1 winners this weekend aboard IMPROBABLE as well as CHASING YESTERDAY. He is the first jockey to win both races since 1997 when Kent Desormeaux one both races aboard LOVE LOCK and REAL QUIET. The Los Alamitos Cash Call Futurity also gave Baffert his fifth straight win in the futurity.

Finally, we wrap up the weekend in Louisiana for the Louisiana Champions Day. While the Fair Grounds in New Orleans hosted a full day of stakes races, the Louisiana Champions Day Classic Stakes was the highlight of the day. While the weather was rather stormy and wet with a sloppy track, it was UNDERPRESSURE who didn't waiver despite the weather. READY PROSPECTOR set the pace with a comfortable lead. ZENUCCI stalked the leader with AUTUMN WARRIOR waiting in third. UNDERPRESSURE sat back in sixth through the turn when he worked his way to the rail and dug in to challenge GRANDE BASIN. He finished ahead by 3 1/2 lengths with a final time of 1:52.82. GRANDE BASIN finished second and MAGEEZ took third five lengths behind.

Other big wins for the day included MIDNIGHT FANTASY in the Lassies Stakes. The filly remains unbeaten in two starts. CLASSY JOHN won the Juvenile Stakes by an impressive 4 1/4 lengths. MAGIC VOW took the Turf Stakes. REMEMBER DAISY won impressively in the Ladies Stakes. GIVEMEAMINIT won the Sprint Stakes and OURS TO RUN finished out the day with a win in the Ladies Sprint Stakes.

The Fair Grounds were the focal point of horse racing this past weekend. The New Orleans based race track hosted a slate of Louisiana Day Championship races on Saturday. We had the 10 stakes races covered in our Wagering Guide with picks, analysis, early speed breakdown and more.

But more importantly, our picks uncovered some nice winning tickets. Our top four picks hit the $215.20 superfecta in race two, the Quarter Horse Classic Stakes. Another super in race five for $156.60, the Lassie Stakes. Again, our four top selections in race nine, the Classic Stakes, crafted a $121.80 superfecta.

With non-stakes races intermingled with stakes races, races two, three, and four generated a nice Pick 3 that paid $1,089.60. Although the fourth wasn't a Championship Day race, our four selections hit another superfecta that paid $1,297.40.

Overall, our Saturday Fair Grounds' picks produced $5,876.30 in potential payouts. Don't miss our next Wagering Guide for the Malibu Stakes.